Depth profile of tower equipment structure
[introduction] the tower equipment factory has been the main tower, although the size of the equipment is large, for some processes (such as distillation) energy consumption is relatively high, but because it has been quite mature in technology and can handle a large number of materials, so for a long time has been widely used in chemical production. 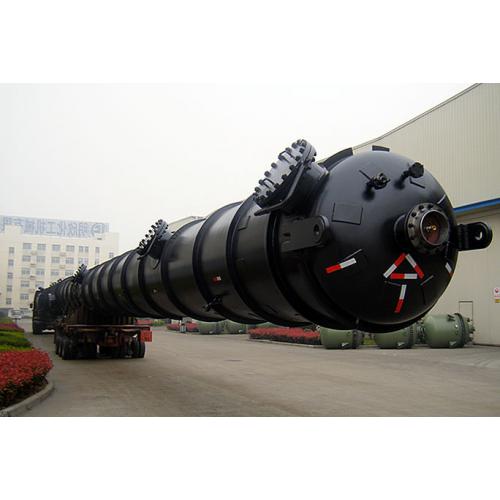 Plate distillation column
Tower, tower liquid by means of gravity, by lowering the upper plate of the liquid pipe flow to the lower liquid disk tray, and then through the lateral plate, from the other side of the downcomer pipe flow to the next lower plate. The function of the overflow weir is to keep a certain thickness of the liquid layer on the tray. The gas is in driving pressure difference, through the bottom-up gas channel of each layer tray (blister, sieve or float valve etc.), dispersed into small streams, bubbling through the liquid layer plate. In the tower, the gas liquid two phases are in close contact, and the heat and mass are exchanged. In a plate column, gas-liquid two-phase composition by contact, the height of the tower was stepped changes. 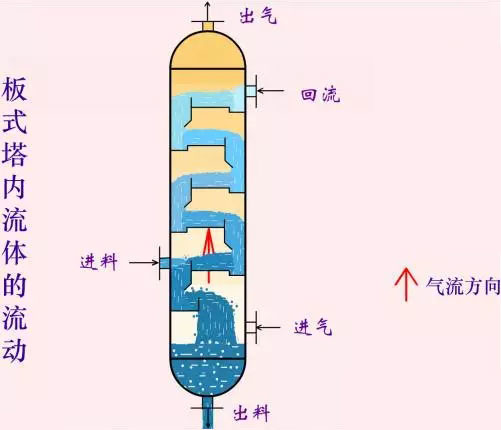 The plate type tower is a step by step contact type gas-liquid mass transfer equipment, which is mainly composed of a cylindrical shell, a tower plate, an overflow weir, a liquid reducing pipe and a liquid tray. 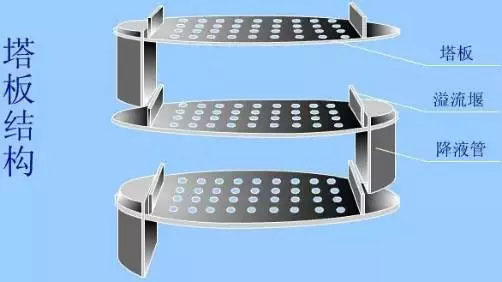 Performance characteristics:
Plate tower has sufficient gas-liquid contact and large processing capacity, and has a smaller pressure drop, leakage and entrainment, and the plate tower is simple in structure, reliable operation, easy installation and low investment. The optimization design of the plate tower is very complex, it needs not only theoretical knowledge, but also need to have enough practical experience.
Two, sieve plate extraction column
The bottom of the tower into the light phase (dispersed phase) through the sieve and dispersed, in the heavy phase (continuous phase) in the rise to a layer of lower part of the sieve plate together into a layer of light liquid dispersion. The process of re dispersion is the extraction and mass transfer process, the top and bottom of the tower are extracted and the residual phase is extracted. 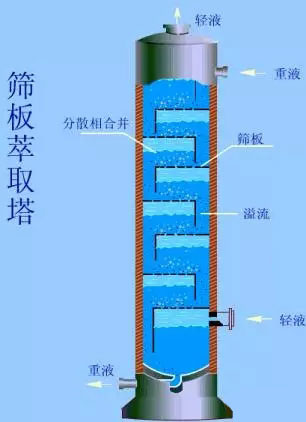 Performance characteristics:
Because of the sieve plate extraction column with large capacity, simple structure, low cost and is widely used in chemical production process. In the liquid-liquid two-phase flow structure has an important influence on the mass transfer efficiency at the same time, continuous flow structure and internal structure are closely related. But the operating flexibility is small, it is easy to be blocked when dealing with the dirty materials.
Three, packed extraction tower
At present, the packed column technology has made great progress in the research and application of the foundation, but because of the complexity of the internal fluid flow and mass transfer process of packed tower, the tower design is still in the empirical and semi empirical level, such as determining the height of the mass transfer coefficient, or in some fluid mechanics performance estimation, are to be to further strengthen basic research. 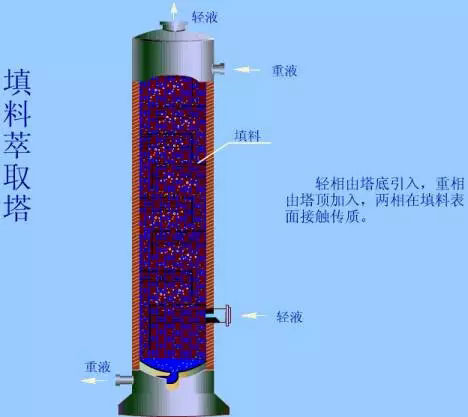 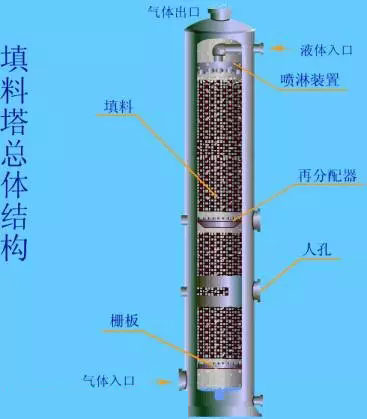 Performance characteristics:
In the extraction equipment, the packed column is one of the most widely used extraction equipment. It not only has the advantages of simple structure, convenient manufacture and installation, but also due to the development of new wiper packing, the processing capacity greatly packed extraction tower increased, the mass transfer efficiency has been improved, and in low voltage operation, separation and energy-saving aspects of the thermosensitive system shows its unique superiority. But since the liquid-liquid extraction process of two-phase density difference is small, continuous phase viscosity, two-phase axial backmixing, complex interfacial phenomena.
Four, the reciprocating plate extraction column
A series of tower plates are arranged on the central rotating shaft and a ring baffle plate which is mixed with the axial direction is reduced. Using the crank the sieve plate on the central shaft doesvertical reciprocating motion, promoting liquid jet caused by dispersed mixing and mass transfer in contact screen. 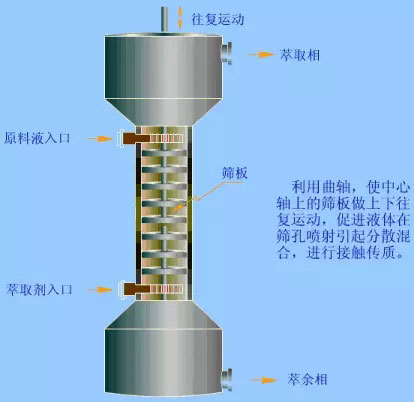 Performance characteristics:
The tower is widely used in petroleum, chemical, food and wet industries, such as the purification of drugs, waste water, etc.. The tower has the advantages of high flux, low theoretical level equivalent, easy to be emulsified or material with solid particles, simple structure and so on.
Five, packed absorption tower
Packing tower is always vertical cylinder, a supporting plate bottom filler to huddle or whole masonry placed on the supporting plate. The filler is installed above the filler plate, in order to prevent rising air blowing.
From the top of the liquid liquid distributor to spray the filler, and the filler surface along the flow. After the gas distribution device (small diameter column is generally no gas distribution device), and the liquid flow through the gap between the filler layer, in the filler surface, gas liquid two phase close contact for mass transfer. 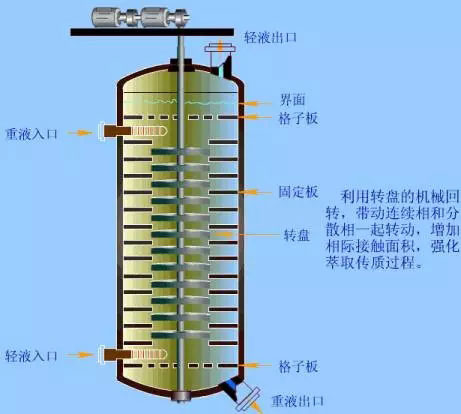 Performance characteristics:
The mechanical rotation of the rotary table is used to drive the rotation of the continuous phase and the dispersed phase to increase the contact area of the phase, and to enhance the mass transfer process.
Seven, bubble cap tower
Inside the bubble cap plate, steam rises through the blister teeth contact with liquid, gas-liquid two phase heat and mass transfer tower. Tower with multilayer level plate, plateThere are several vapor supply (or gas) through the short, on each of which covers the bottom edge of blister slot or small groove, and is provided with an overflow pipe.
During the operation, continuous liquid enters from the upper part of the tower, the overflow pipe plate decreases, and the liquid layer accumulated in each plate, the formation of liquid seal; steam (gas) enters from the bottom of the column, through the blister on the bottom edge of teeth or small grooves dispersed as small bubbles, full contact with the liquid, and through the liquid layer of the liquid, and then move on a tray. The short pipe is arranged in the tower, said in the overflow; there are mounted in the tower, said outside overflow. 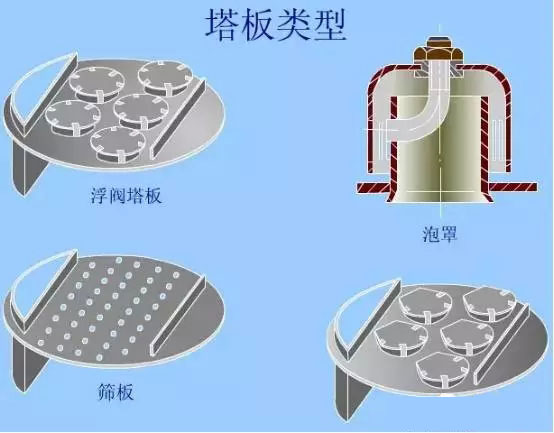 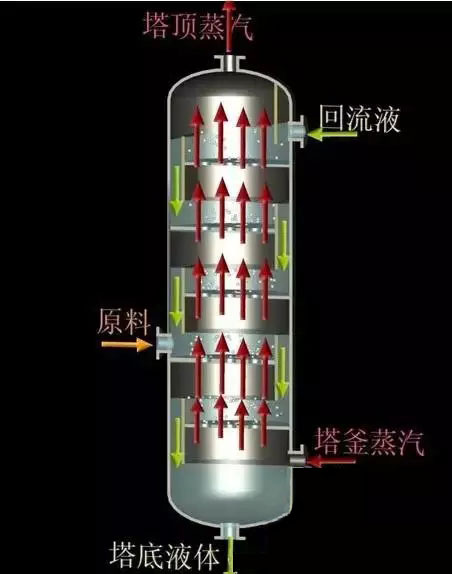 Performance characteristics:
Bubble cap tower is suitable for flexible operation, not easy to plug, high efficiency, easy to operate, but its complex structure, high cost, large pressure drop, bubble cap tower is widely used in distillation and gas absorption.
The disadvantage is that the structure is complicated, the cost is high, the liquid layer on the plate is thick, the column plate pressure drop is big, the production capacity and the plate efficiency is low. Bubble cap tray has been sieve, valve trays are replaced by the new tower equipment less.
Eight, gas cooling tower
Hot gas from the bottom of the tower, and the cold water in the tower in the bubble contact heat transfer, tower top outlet is cooled gas, tower bottom outlet is heated water. 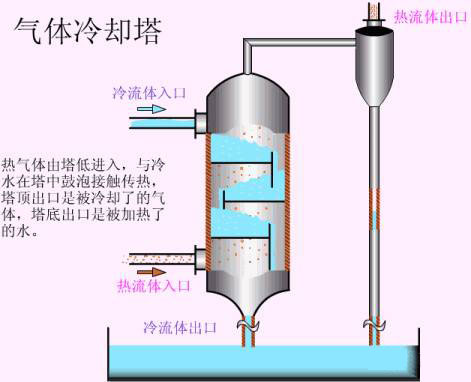 Performance characteristics:
The waste heat generated in the process of industrial production or refrigeration, usually by cooling water to take the lead. The cooling tower is the role of the cooling water with heat of heat exchange in the tower and air, the heat transfer to the air and scattered into the atmosphere.
Scope of application: mainly used in air conditioning cooling tower cooling system, refrigeration series, injection molding, foam, leather, aluminum processing power, steam turbine, air compressor, cooling water, industrial and other fields, the most widely used for air conditioning cooling and refrigeration, plastic chemical industry.
Nine, washing tower
The washing tower is similar to the distillation column, which is composed of a tower body, a tower plate, a re boiling device and a condenser. As the washing tower is a coarse separation equipment, so the number of tray is generally less, usually not more than ten.
The washing tower is suitable for the separation of the mixed gas containing a small amount of dust, the components are not reacted, and the product is easy to be liquefied, dust and other impurities (also known as high boiling material) is not easy to liquefied or solidified. When the mixed gas washing tower from the middle into the washing tower, due to the presence of the product components of liquid column plate, the product components of gas liquefaction and evaporation, while the impurities cannot be due to liquefaction or solidification, when through plateliquid there will be a product component liquid fixed produce washing function. 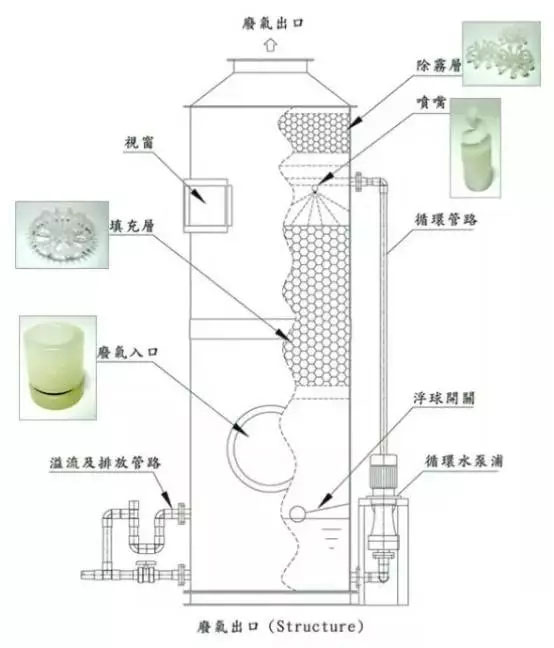 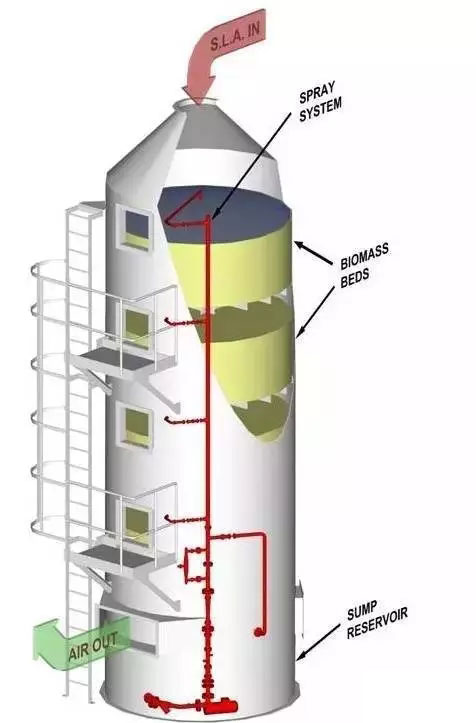 Performance characteristics:
The utility model has the advantages of low cost and simple processing method, and the upright structure is most suitable for the installation of the economic space; the utility model is suitable for the gaseous and liquid pollution sources; the single pollution source is processed; the low air volume is suitable for the medium and low air volume.
Ten, fractionation tower
Fractionation tower is a kind of chemical equipment for fractionation of mixed volatile liquid (such as petroleum). Fractionation is the essence of the boiling point of the liquid mixture is different, and in turn the results of heating separation. Fractionation of successive repeated vaporization and condensation, the separated material is still a mixture, but different boiling range, is the use of distillation tower in an operation process of mixture gasification condensation process &mdash times. The fractionating tower tower ring, in a limited space, as far as possible to increase the maximum fractionator liquid mixture heat exchange area. 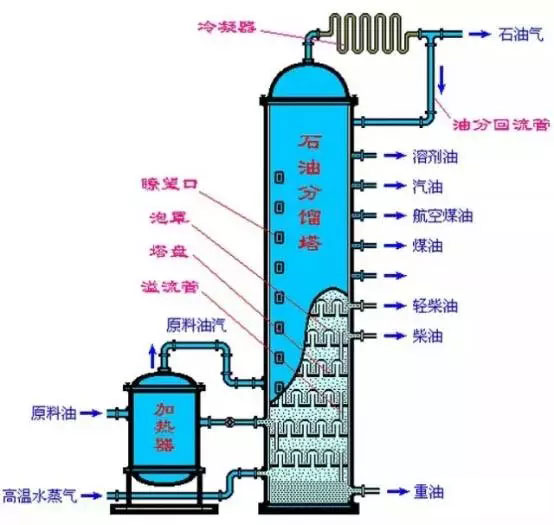